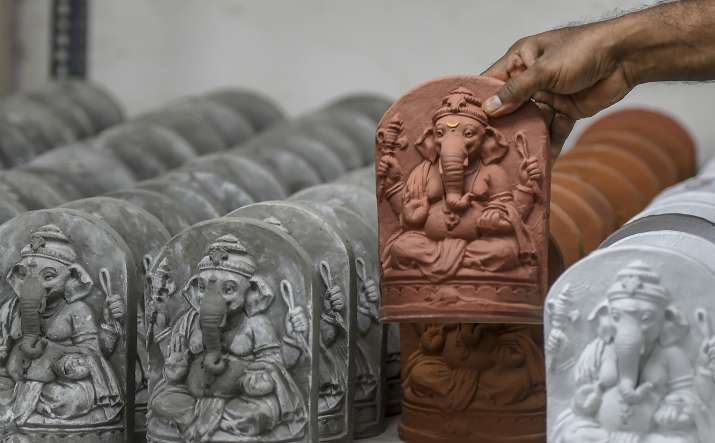 The Brihanmumbai Municipal Corporation on Thursday said Ganesh `mandals’ located in COVID-19 containment zones in the city will have to conduct idol immersions inside their own pandals. Pause Unmute Loaded: 40.77% Fullscreen Ganesh mandals install idols in public, usually in roadside pandals.

As per the guidelines issued by the civic body for the Ganesh festival which begins from August 22, the same rule will apply for idols installed by individual devotees if their homes lie in a containment zone. With over 1.13 lakh COVID-19 cases and nearly 6,300 deaths, Mumbai is one of the worst pandemic-affected cities in the country. Also Read | Bakrid 2020: Assam’s Kamrup Metropolitan District to Allow Only 5-Member Gathering at Mosques or Eidgahs for Namaz.

At least 6,173 buildings have been sealed in the city, while the civic body has identified 616 containment zones. Such zones, where coronavirus cases have been found, remain sealed for 14 days. Usually lakhs of devotees head for Mumbai’s seashore for immersing the idols on the last day of the festival. Strict action will be taken against violators under the Epidemic Diseases Act, 1897, Disaster Management Act, 2005 and Indian Penal Code, the BMC said. The BMC also appealed to people to celebrate the festival in a simple manner.

The state government and civic authorities have already capped the height of idols at four feet for Ganesh mandals and two feet for domestic Ganpatis. The civic body also appealed to Ganesh mandals to conduct health camps instead of cultural programmes and create awareness about health issues through advertisements.

Abhishek Bachchan shared this photo (courtesy bachchan)HighlightsAbhishek shared a pic of his health board from hospital Abhishek was admitted to Nanavati Hospital on July...
Read more
Lifestyle

It is that time of the year when festivities are at peak. And to make it yet more special, Amazon is here with...
Read more
Load more

Before And After: Havoc In Lebanon As Blasts Leave Over 100 Dead

The impact of the blast registered by seismologists as the equivalent of a 3.3-magnitude earthquakeNew Delhi: The city of Beirut has been left...
Read more

Mumbai's Colaba area received 22.9 cm rainfall while Santacruz received 8.8 cm rainMumbai: The weather in Mumbai – which is being pounded by...
Read more

“Hogwash”: Mehbooba Mufti On Lifting Of 2-Day Curfew In Jammu And Kashmir

Abhishek Bachchan shared this photo (courtesy bachchan)HighlightsAbhishek shared a pic of his health board from hospital Abhishek was admitted to Nanavati Hospital on July...
Read more

Pinarayi Vijayan said he was not surprised by the Congress stand on the Ram Temple. (File)Thiruvananthapuram: Responding to questions on pro-Ram Temple reactions...
Read more